When I was a child living in southern New Hampshire, my family home was in the grounds of an abandoned homestead made up of massive stone foundations of quarried granite that once housed apartments. Stone walls snaked through the forest. As I explored the deep forests of tall oak and maple trees, I wondered who had built these walls and why. What stories did these walls contain?

Decades later, as I lived in a rural setting in New York State and neared retirement as a geologist, my long-dormant interest was revived by hiking in the neighboring woods. By now, I knew that stone walls in New England and New York are iconic remnants of a time when farmers had to clear the land of stones to grow crops and graze cattle. During the last glaciation, which ended about 10,000 years ago, tons and tons of granite had been deposited across the region.

By the late 19th century, nearly 170,000 subsistence farming families had built an estimated 246,000 miles of stone walls to the northeast. But by that point the industrial revolution had already begun to contribute to the widespread abandonment of these farms in the northeastern United States. They were covered by forests within a few decades.

On my recent walks through the woods, I used a portable GPS device on a whim to map several miles of stone walls. And so, it became clear to me that their locations are not only part of an American heritage, but also record a centuries-long history of Earth’s migratory magnetic field.

Connect the walls with historical maps

The complex arrangement of walls that resulted from my GPS measurements made no sense to me until I found an old map of my town’s property lines in the local historical society. Suddenly I saw that some of the stone walls on my map were along the property lines from 1790. They marked borders.

My subsequent search of church registers and decades of federal census found the names of these farming families and details of their lives, including the annual yields from their crops. I got the feeling that the stone walls connected me to the long-gone people who had worked this land.

Now the wheels were really turning in my scientist’s mind. Did the original land surveys from the 18th and 19th centuries still exist in this district? What were the magnetic compass bearings on these boundaries in the original survey? 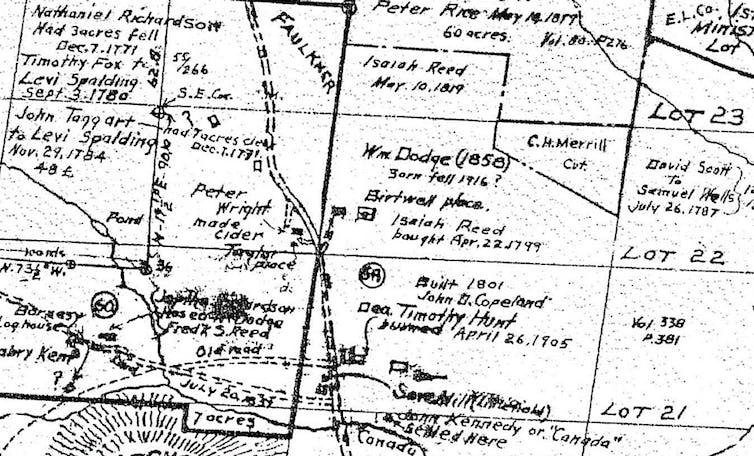 Historical maps and surveys underline the orderly manner in which properties were separated from the landscape in a grid.
Charles Peirce / Stoddard, New Hampshire

I knew that the location of Magnetic North shifts over time due to changes in the Earth’s core. Could I determine drift from stone walls and ancient land surveys? My preliminary map of the stone walls and some historical research indicated that the approach had potential.

However, in order to have scientific value, this work had to span much larger areas. I needed a different strategy to find and map stone walls. Fortunately, I found two pieces of useful information. First, the New York State Archives had hundreds of the original land surveys from the 18th and 19th centuries. Second, LiDAR (Light Detection and Ranging) images were publicly available in the air, which could reveal stone walls hidden under the forest canopy over much larger areas than I could cover on foot alone. 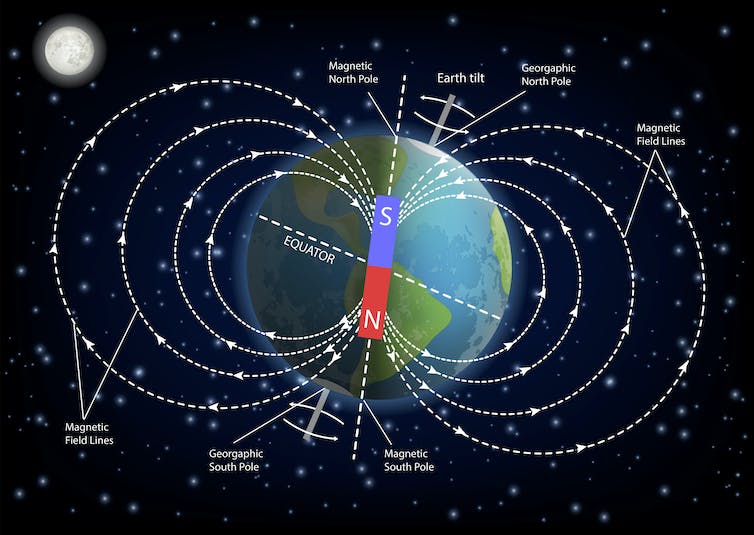 Magnetic north and true north are not the same – and their differences change over time.
Siberian Art / Shutterstock.com

Tracking the drift of Magnetic North over time

The earth rotates around its axis every 24 hours. The position of this spin axis in the northern hemisphere is called true north and moves very slowly. However, the true north location can be viewed as stationary on a timescale of several centuries.

But that’s not where a compass will go when it points north. In addition to being in a different location than true north, the location of the North Magnetic Pole is also changing rapidly – currently around one degree per 10 years in New England.

The difference in direction between true north and magnetic north (at a given time and place on earth) is known as magnetic declination. Global information about historical fluctuations in magnetic declination is currently based on thousands of magnetic compass bearings recorded in ships’ navigation logs from 1590 onwards.

But now my work on 726 mile stone walls offers independent control of magnetic declination between 1685 and 1910.

Here’s the logic. When settlers piled these stones along the boundaries of their properties, they used property lines that were laid out according to the surveyors’ compass values. Using LiDAR images, it was possible to determine the bearings of these stone walls in relation to true north and to compare them with the surveyors’ magnetic bearings. The difference is the magnetic declination at the time of the original survey.

For example, the original surveys divided the New Hampshire parish of Stoddard, New Hampshire, into hundreds of lots with boundaries with magnetic compass bearings of N80 degrees W and N14 degrees E in 1768. When the land was cleared for agriculture, the owners built along and within these 1768 stone walls measured boundaries. 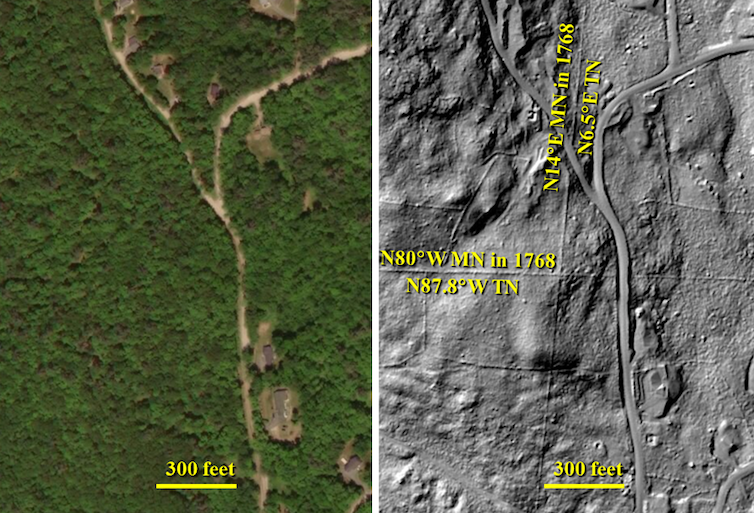 Lidar reveals the stone walls hidden under the canopy. Comparing their orientation with true north provides the magnetic declination at this point when the boundaries were measured in 1768.
CC BY-ND

Data from these stone walls strengthen the current geophysical model of the earth’s magnetic field.

Country diary: a coral form with a fondness for dry stone walls | Environment