Why artificial turf may truly be bad for kids

If you’re looking to grab a soccer mom’s attention, bring up the topic of artificial turf, the preferred playing surface for kids from preschool to college – or at least by school boards, parks, and recreational departments.

Parents are alarmed by reports in the media of increased injuries and illnesses amid concerns about the impact on cancer.

And there is still the question of who is responsible for ensuring the safety of these areas: the Environmental Protection Agency? The Centers for Disease Control? The Consumer Product Safety Commission?

As an environmental health professor who has studied a wide variety of environmental issues, and as a soccer dad who saw my son play on these fields for years, I think it is worth exploring the facts and myths about artificial turf fields and the potential dangers with playing connected on them. Based on studies that I have reviewed and conducted, I believe there is a potential health hazard because of the chemicals in tires that are recycled into crumbs to support the plastic blades of artificial turf.

What is it anyway?

The crumbs of artificial grass.

Various pigments are used to provide the green color of the blades. This can be lead or titanium for the white lines and still other metals for school logos on the field.

Those little black crumbs are the problems. Tires can be poisonous.

Modern tires are a mixture of natural and synthetic rubber, carbon black – a material made from petroleum – and between 4 and 10 gallons of petroleum products. They also contain metals like cadmium, lead, which is neurotoxic, and zinc.

Some of the chemicals in tires, such as dibenzopyrene, are known to be carcinogenic.

In addition to the chemicals used in the manufacture of the tire, any chemical to which the tires have been exposed in their use can be absorbed by the soot in the tires.

More to the problem than crumbs

Even if artificial turf does not have to be mowed,
It turns out that crabgrass and other weeds can grow in it. Weedkillers must be used to maintain their neatly groomed appearance, a relatively common practice.

Unfortunately, a number of health concerns have been associated with these products.

Artificial turf is also often treated with biocides, as turf has been linked to an increased risk of infection from methicillin-resistant Staphylococcus aureus (MRSA). MRSA is a dangerous infection because it is resistant to many antibiotics. It can lead to pneumonia, sepsis, and bloodstream infections which can prove fatal. MRSA infection can occur after the skin has been scraped or cut, which can occur when sliding on artificial turf.

However, biocides can themselves have toxic effects. They can also contribute to an increased resistance of bacteria to the effectiveness of these agents.

Fields with artificial turf tend to get much hotter than lawns. Field surface temperatures can reach up to 200 degrees Fahrenheit. At these temperatures, children can burn their feet even with sports shoes. Even on a very hot day, it’s rare for natural grass to exceed half of that.

While manufacturers recommend spraying fields with water to keep the temperature low, this improvement can go away in as little as 20 minutes.

Artificial turf is a harder surface than grass because it is laid over either concrete or compacted earth. This can increase your risk of injury, especially a concussion.

The unit used to describe hardness is Gmax. While different numbers have been reported for the Gmax for artificial turf, ranging from the high 60s to over 125, it is important to note that these numbers are highly dependent on the substrate, temperature, age and maintenance of the field. The key is that the higher the number, the higher the chance of a concussion.

Can the tire chemicals get into children?

The key question about exposure is: do these chemicals get into children who play in these fields?

While the tire crumbs are large, it is easy to demonstrate that they do not necessarily stay large for the life of the field. In a study in New Jersey, we used a robot we call PIPER (Pretoddler Inhalable Particulate Environmental Robotic) to see if the artificial turf had inhalable exposures. 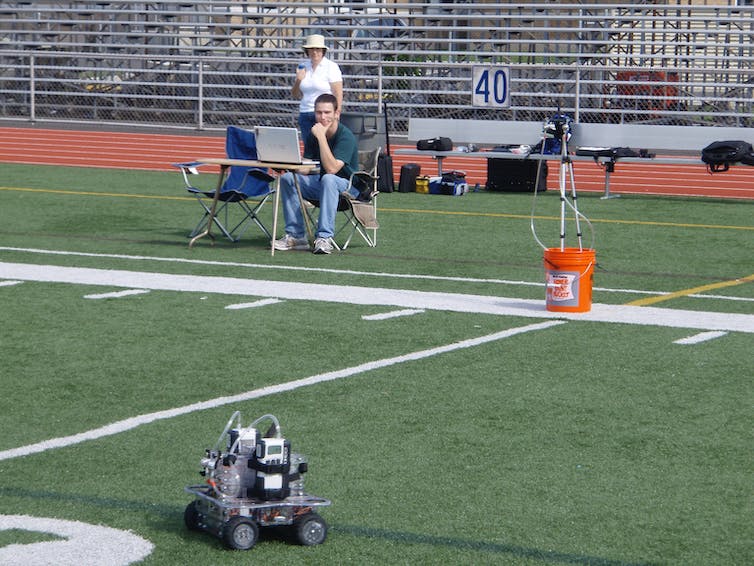 We have shown that the tiny particles of turf float in the air above the field and can be breathed in by children playing in the field. It has been shown that microscopic soot particles break off the crumb rubber and are small enough to be inhalable. In addition, after years of exposure to the sun and the weather, the blades of grass can disintegrate into microscopic particles and form an inhalable dust.

How do these particles get into a child?

Think of the cartoon character Pig Peanuts “Peanuts”, the child who is always followed by a visible cloud. The truth is that all children – in fact all humans – have a cloud of microscopic particles around them. This personal microenvironment of dust particles, invisible to the naked eye, is just as real as that of Pig Pen.

These small particles and their chemicals can be inhaled or swallowed by a child.

And if so, do they cause disease?

A straight answer as to whether artificial turf increases the risk of injury or illness is far more difficult.

The issue of cancer and artificial turf garnered national attention in the United States with a series of NBC Nightly News reports on a range of cancers among young female footballers.

A cancer cluster is the occurrence of an abnormally high rate of cancer in one place over a given time frame. The story, though rejected by the turf industry, reappeared in the fall of 2015.

Information has also been gathered on this cancer cluster. While up to 80 percent of suspected cancer clusters are classified as an untruthful increase in cancer cases and only due to random coincidences, the problem is that without a detailed and often expensive scientific investigation, it cannot be determined whether it is a real one or not.

Just recently, the Washington State Department of Health published a report on its study of reported cancer clusters in these soccer players. Their report found no evidence of a causal effect of playing on artificial turf and cancer. As they acknowledge, that doesn’t mean there is no risk, just that this study found no risk. They also suggested that there is still room for more extensive research on this issue.

What about the potential risk of neurological impairment from ingesting or inhaling lead found in the turf? The lead can be present in the blades as a color pigment for logos and white lines as well as in the crumb rubber. For more information on lead, see my previous article on The Conversation.

What is the bottom line in terms of security?

While the turf industry says it’s safe, we know tires contain established carcinogens. If we just took into account what tires are made of, we would think they should be classified as hazardous waste, even though the EPA is currently classifying tires as municipal waste.

The EPA has conducted studies on the toxicity of crumb rubber, but the jury has not yet decided.

Many scientists have little doubt that crumb rubber shouldn’t be a first choice material for children to play on. Parents should be able to just enjoy watching their children exercise and not worry about putting them unnecessarily at risk.

How to Lay Artificial Grass

Barter to make his mark at Brett Landscaping – Builders…